Chief Looking’s Village in Bismarck is among the most frequently visited archaeological sites in the Northern Plains. The settlement was founded in the mid-1500s and today, its sepctacular views of the Missour Rier valley attract school children, weekend picnickers, and early morning joggers. To enhance both public and scientific understanding of the village site, the NPNHA sponsored a multi-year project lead by Paleocultural Research Group. One result of their resach was the creation of a series of new interpretive signs and an interpretive kiosk produced by the Bismarck Parks and Recreation District in collaboration with the NPNHA research team. 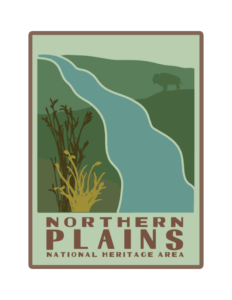